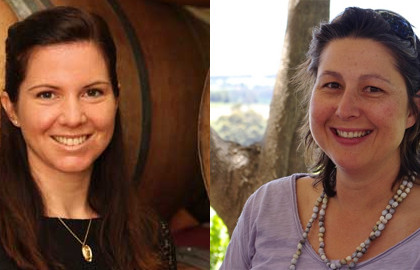 Several years ago, I was a judge on a competition for South African women winemakers which, even at the time, I found a little confusing because I can’t really see that a wine made by a woman is going to be any better or worse than one made by a man. The theory behind the competition was that the wine industry lacked female role models and the award was given, not just for the wine, but also for contributions to the wine world. I’m not going to get into arguments about whether positive discrimination is a good or a bad thing, but just as a segway, I will say that I still find it a little surprising that the prestigious Cape Winemakers Guild has only two winemaking women members out of 45. Having said that, what I don’t find surprising, in any way at all, is that this list of arguably the best 45 winemakers in SA includes both Rianie Strydom and Andrea Mullineux.

I first met Rianie many years ago when she was winemaker at Morgenhof, turning out excellent Merlot and Chenin as well as a great value Cab Franc blend. From there, she moved to Haskell Vineyards when they first began making wine on the slopes of the Helderberg and, although not as hands-on there as previously, she has still been involved in each of the ten vintages made so far. There are two ranges made on the farm – the excellent and over-delivering Dombeya range which is made in a forthright and fruity style, and the more elegant ‘keeping’ range of Haskell itself.

At a recent tasting, Rianie and viticulturist Wikus Pretorius took lucky tasters through the last three vintages of their Anvil Chardonnay, as well as new releases of their Bordeaux-style blend the IV, the Pillars Shiraz and a terrific Cab/Shiraz blend, the II. They are trying to keep the alcohols in check on the chardonnay and reduce the amount of malolactic fermentation which takes place, both with a view to making a fresher wine but one which will still age well. The stars of the day however were the two red blends, the II 2010 (R160) and the IV 2009 (R290) which show elegant tannins and concentrated powerful fruit. If you can keep these for another decade, I think you’ll be a very happy drinker when the time comes.

Andrea Mullineux practices her art in the slightly warmer climes of the Swartland where she and viticulturist husband Chris concentrate on a range of syrahs (shirazes) from soil-specific sites. When I first tasted them, I didn’t like the individual Schist and Granite wines, thinking them over-the-top, far too perfumed for enjoyment and much preferring the Family Wines Syrah, a blend of the different soils, which I thought was harmonious and just utterly delicious. So it was with a wry smile that I tasted them again recently and realised that either time or vintage had altered my opinion completely and the full-bodied yet elegant Schist Syrah 2012 (R685) is the star of the show for me now. If you can get your hands on some (although it’s rarer than hens’ teeth), you’ve got a treat in store.

Both women have had wines selected for this year’s Cape Winemakers Guild Auction which will take place in October. This is the 30th Auction so it’s a chance to reflect on the last 30 years and celebrate the new wave of younger winemakers taking the industry to even greater heights. Both Rianie and Andrea have something a little out of the box to offer – Rianie will be continuing her love affair with Burgundian varieties and offering her first ever Pinot Noir whilst Andrea has possibly the most interesting wine on the auction, a very rare and unusual bottling of Semillon Gris. Coming from 55 year old vines which need 30 years to develop the ‘gris’ characteristics, this is going to be a special treat indeed.