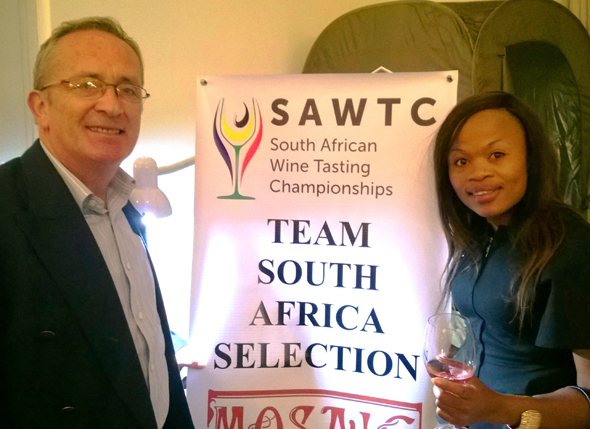 who will also be representing Team SA in France next month

is the winner of the three year Restaurant Mosaic Sommelier Protégé Bursary and was selected from a search held nationwide in conjunction with the South African Wine Tasting Championships (SAWTC).

She will now receive the necessary formal education required and achieve the best professional experience, under the guidance of the Restaurant Mosaic Cellar Team whilst gaining valuable exposure to the industry. She has also been accepted into the South African Sommeliers Association (SASA).
Plaatjies, who is currently studying for her National Certificate in Food and Beverage Services, has extensive restaurant experience and has worked at African Pride’s 15 on Orange Hotel in Cape Town and Sun International’s Maslow Hotel.

Her future plans include owning and running a wine club to give wine educational programmes for formerly disadvantaged students hoping to work in the hospitality industry as well as for corporate clients and business people who have not had extensive exposure to wine in the past.

Fifteen of the country’s best tasters, chosen at provincial competitions held in Johannesburg, Durban and Cape Town, met at the SAWTC finals to face the challenge of identifying wines from around the world and to decide who deserved to form part of the 2015 South African Champion Team. Plaatjies attended both the Johannesburg and Cape Town events, and performed outstandingly, qualifying in both events making her the undisputed winner of this year’s Mosaic bursary.

This means that Miss Plaatjies will be part of Team South Africa  2015 that comprises captain Ralph Reynolds , Joseph T. Dhafana, Anita Streicher Nel, and will fly the national colours in France at the World Blind Challenge on October 17.

The competitors have two hours during the blind tasting to identify 12 wines from eight different countries. They have to guess the country, the cultivar, the vintage, the appellation and the producer of the wines served to them.

Says Plaatjies: “I am delighted to be part of the 2015 SAWTC Team representing not only South Africa, but also Restaurant Mosaic where I will be getting valuable work experience at one of the country’s top restaurants. I know I am going to learn so much from both Chantel and Germain – it is a once-in-a-lifetime opportunity that could change my life forever.”

Says Chef Chantel Dartnall of Restaurant Mosaic: “We are thrilled that Veronica will be joining Restaurant Mosaic on our Protégé Programme. Sommeliers play a very big role in the restaurant and are as much part of the dining experience as the chefs who create the magic in the kitchen. We hope that this bursary will help her reach new heights and are delighted that we have been able to afford her the opportunity to fulfil her dreams.”

Says manager of Team South Africa and owner of the SAWTC, Jean-Vincent Ridon: “Experience is the key to become a good sommelier. Theoretical knowledge will never replace the human touch, as the sommelier is here to turn good service and a good meal into a perfect experience. Apprenticeship is always the best way to train a good sommelier, and the Mosaic Protégé Programme will change the way the industry looks at training professionals. We are sure that Veronica is going to achieve great things in the future.”