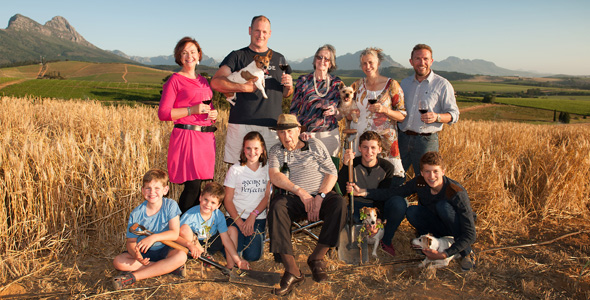 I’ve been thinking a lot about friends and family these past weeks, partly from personal circumstances, but also because a couple of recent events have reinforced the importance of both within the SA wine industry. This industry (like every other industry) is all about money – we all know that – dictating what kinds of wines we can make, how we sell them and for how much, but the things it produces are social products, to be enjoyed at our leisure, drunk with our friends and family. So here’s to the link between the people who make it and we who drink it, as we relish the personalities and contributions from a few of the people involved in making our favourite tipple.

One family with a long and honourable place in the SA wine history is the Sperling family from Delheim. Spatz Sperling was one of the pioneers of wine tourism, setting up SA’s first ever wine route along with Spier and Simonsig and has been making wine in the Simonsberg for decades. The farm was originally started by his uncle and aunt in 1949 before he joined them fresh from his studies at Geisenheim in Germany. Nowadays, his children Victor and Nora are in charge of the farm along with the very able assistance of winemaker Reg Holder and viticulturist Etienne Terblanche.

Delheim’s flagship red, the Grand Reserve, is only released in stellar years and it was a cause for celebration when the latest 2013 version (R285 cellar door) was launched last week. It’s Reg’s first Grand Reserve and he’s crafted it in classic style using Cabernet Sauvignon grapes from the cool slopes of Delheim’s Vera Cruz property. The wine is aged in small French oak barrels, all of them new, and is meant for the long term with firm but ripe tannins supporting concentrated black-berried fruit. At the launch, Reg also showed older Grand Reserves, with the stars of the show being the 2006 and 2007 – delicious wines, just beginning to open up. The 2013 is a worthy successor and should easily last another decade or more.

From one colourful character on the north side of Stellenbosch to another, equally-colourful, who made his name on the Helderberg and is now to be found in the town centre. Giorgio Dalla Cia was the man behind many decades of Meerlust excellence before he followed in his father’s footsteps and set up his own label producing wine and husk spirit (grappa now being a legally-protected term reserved for Italian spirits). The wines have done very well with the 2007 Giorgio red blend winning five stars from the Platter Guide in 2013, but it’s now the turn of their spirits to take centre stage.

Made by Giorgio’s son George (with more than a few robust, wine-fuelled discussions from his father no doubt!), the Dalla Cia 10 Year Old Cabernet Sauvignon-Merlot Husk Spirit has just won the very first Platter Five star plaudit for a husk spirit. Most grappas are clear, but this one has been aged for a decade in small new French oak barrels, picking up a deep gold colour as well as plenty of aromas of toasted apricots, marzipan, orange peel and smoke. Handcrafted by George, it’s also been hand-bottled, hand labelled and each 500ml bottle is signed and numbered by him as well. Only 1,000 bottles have been made and at R2,325 each, it’s a pricy but very special present for a lucky someone this Christmas.

From families with long winemaking histories to new families forging the future – congratulations are in order to Chris and Andrea Mullineux for their thoroughly well-deserved success at the Platter launch the other week. Their wines won five 5 Star gongs, two of them also garnering Wine of the Year awards as well. All this meant that Mullineux & Leeu Family Wines is Platter Winery of the Year for the second time in three years. Wonderful wines lovingly handmade by passionate individuals – long live family winemaking in the Cape!